Mahendra Singh Dhoni, on Friday, addressed the media for the first time after stepping down as India’s ODI skipper. Dhoni raised the curtains on why he finally chose to hand over the batons to Virat Kohli in limited-overs cricket.

Mahendra Singh Dhoni will be featuring in the first ODI against England to be played on January 15 at Pune.

The 35-year-old batsman further revealed that the South Africa series in 2015 was, in his mind, last as limited overs skipper.

Here are the highlights from his conference:

Dhoni, who led India for over nine years, also asserted that wicketkeeper of any team is always a vice-captain, irrespective of whether he is announced vice-captain or not.

The wicket-keeper batsman, who made his ODI debut in December 2003 against Bangladesh in Chittagong, also said a lot of things did change since the time he took over the captaincy in 2007 to now.

“The requirement of the team has changed as well. No fixed batting order for me. The guys at the top did remarkably. I will change my role as per the responsibilities given to me. Depending on where I am batting, I will bat accordingly,” Dhoni said. 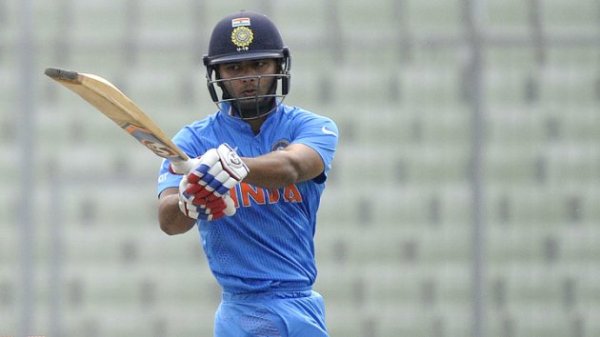 Young Rishabh Pant has a bright future ahead of him

Indian cricket appears to be in safe hands. On Thursday, India’s young ‘A’ team, led by Ajinkya Rahane, defeated a strong England XI by six wickets in the second practice ODI, chasing down the challenging 282-run target with more than 10 overs to spare.

Youngsters shone bright for the home team. Skipper Rahane stroked a fluent 91 (83b, 10×4, 1×6) while Saurashtra batsman Sheldon Jackson gave him company with a languid 59. The opening pair added 119 before Jackson was dismissed.

England XI had earlier made a terrific start after winning the toss with half-centuries from Hales (51) and Bairstow (64). A tight spell of spin bowling from Parvez Rasool (3/38) triggered a miniature collapse for the visitors and reduced them to 198/8.

A last wicket association of 71 between Adil Rashid (39) and David Willey (38) helped England XI to 282, before the innings concluded 7 balls before its stipulated quota.

The teams now move to Pune for Sunday’s first of three ODIs.